On October 21, John Morris prepared take his first flight since the COVID-19 pandemic hit. He planned to travel from his home in Gainesville, Florida, through Dallas and onto Roswell, New Mexico.

He arrived at the American Airlines check-in counter at Gainesville Regional Airport and started the normal process of declaring his power wheelchair, only to have a supervisor inform him that since his wheelchair weighed more than 300 pounds, it was too heavy and he would not be allowed to board his scheduled flight. Additionally, Morris was informed that because of the limitations of the CRJ 700 and 900 jets American flies into both his home airport and Roswell, the airline would not be able to rebook him. “Basically, they just said, ‘We’ll cancel your ticket right here, and have a nice day,’” says Morris. “I was shell shocked.”

Morris, a triple amputee, runs the popular travel website wheelchairtravel.org and has the process of flying down to a science. “I’ve flown more than a million miles as a wheelchair user, and I’ve never been denied boarding by any airline in the world,” he says.

Under the Air Carrier Access Act, airlines operating in the United States may not refuse transportation to people on the basis of disability unless allowing them to fly would endanger the safety of the flight. In a written report that American sent to Morris after he alleged a violation of the ACAA, American referenced the section of the ACAA that pertains to Stowage of Wheelchairs and Mobility Aids and Assistive Devices (Subpart I):

If the physical size of the compartment — its actual dimensions, not crowding caused by other items — do not permit a wheelchair to be carried upright safely without risk of serious damage to the wheelchair, or a load imbalance caused by a large wheelchair in a small baggage compartment may violate weight and balance safety requirements, carriers could legitimately decline transportation of the item on that flight.

This phrasing and rationale does not exist in the current wording of the ACAA.

The American supervisor at the airport told Morris that this weight limit policy went into effect on June 12. American claims there is no new policy, but it did post information about its aircraft, including weight and dimensions for items carried in the cargo compartment, on its website and internal platforms over the summer. What remains unclear is what has changed to justify these wheelchair weight limits. Bombardier CRJ700 series aircraft, the type on which Morris was denied access, have been in operation since 1999. Referencing a spreadsheet of his travels, Morris says that he has flown on at least 36 American Airlines flights on these particular jets since 2017, all without incident. His last flight before COVID, on February 29, was on the same CRJ series jet flying from Dallas to Gainesville, the reverse of his intended October 21 route. 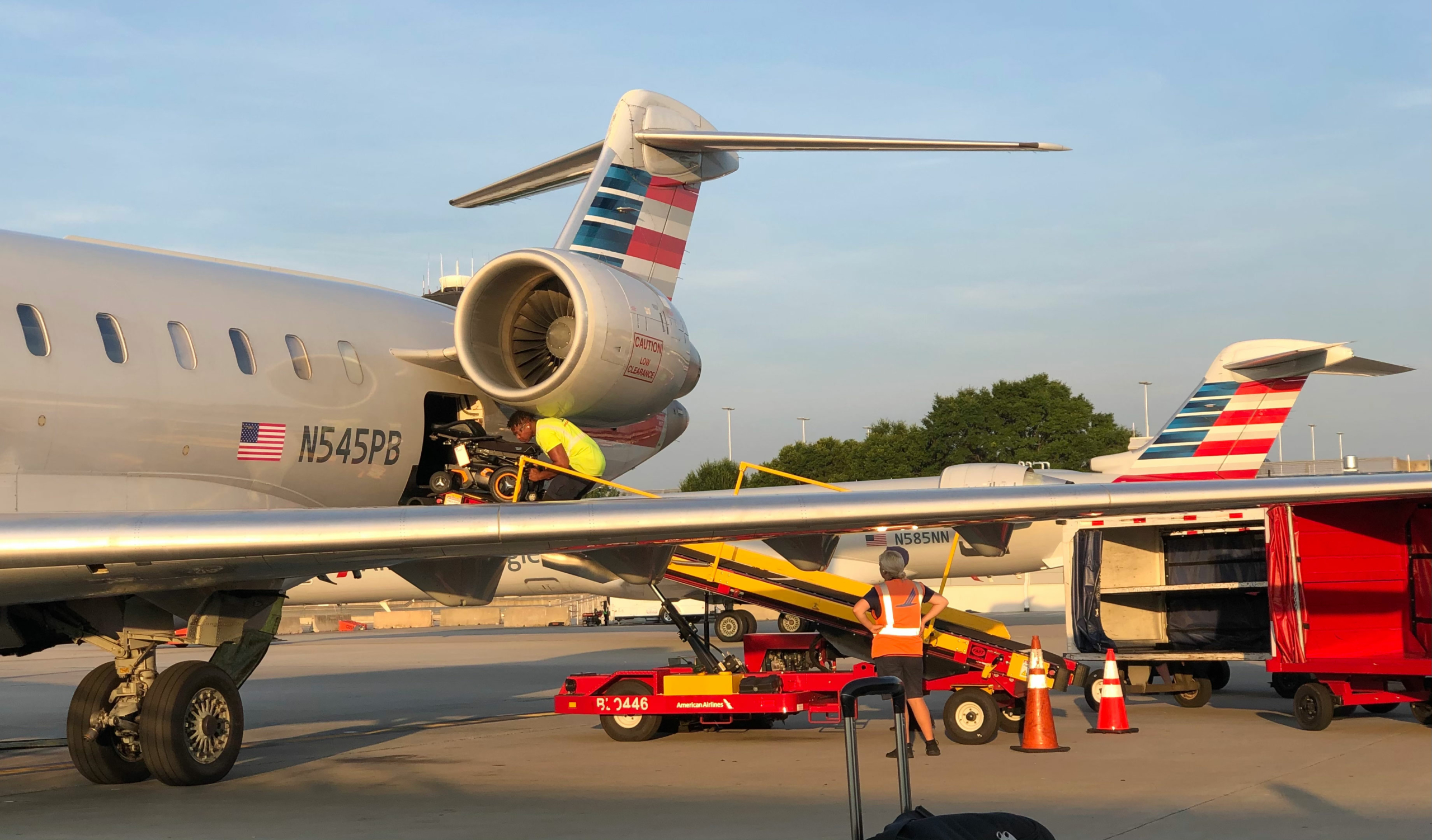 John Morris’ wheelchair is loaded onto the same CRJ 700 aircraft that he was recently denied access to.

After being denied access by American, Morris went to the Delta desk at his airport, as they operate the same type of small, regional jets, and asked if he could fly. “They said, ‘Yes, of course, there’s no limitation on weight … your wheelchair will just need to fit in the cargo hold and these are the dimensions. If it can do that, of course we’ll take you,’” he says. “That has been the standard operating procedure for air travel in the United States.”

Morris flies so much on American that he holds Executive Platinum status with the airline. He called an executive liaison and asked for more information about why he had been denied access. Eventually a representative got back to him. “What she told me was that American instituted this new policy because they’re concerned about damaging customers’ wheelchairs. I pressed her on that further, and I said, ‘So what you’re telling me is that this is essentially designed to protect the airline’s bottom line so that they don’t have to repair wheelchairs that are damaged as a result of being loaded on this aircraft.’ And she obviously would not confirm that.”

Since airlines first began reporting mishandled and damaged wheelchair data in 2019, American has consistently ranked near the bottom of major U.S. airlines for number and percentage of wheelchairs damaged. In 2017, New Mobility contributor and power wheelchair user, Mark Smith, was removed from an American Airlines flight he had already boarded with no justification.

We reached out to American Airlines for confirmation of its new wheelchair policy and the reasoning behind it. We also asked what has changed in the past year and why accommodating Morris would endanger the safety of the flight. Stacy Day, of American’s media relations team, sent this statement is response:

“We’re dedicated to providing a positive travel experience for all of our customers. Our team has thoroughly reviewed this issue, and we have been in touch with Mr. Morris to apologize and hear his concerns.

We do all we can to safely accommodate mobility devices, though we are limited in the weight and size of items we can load onto our smaller aircraft. While we have previously transported Mr. Morris’s mobility device on a similar aircraft type, we determined that we could not carry it properly in this case. That decision was made with the safe transport of his mobility device in mind, as well as the safety of our team members who load these important items onto our aircraft.

We sincerely regret that Mr. Morris had this experience, and we are committed to learning from this as we make every effort to better serve our customers with disabilities.”

Morris, who has work commitments across the country in the coming weeks, is left scrambling to figure out how to fly without spending thousands of dollars on last-minute tickets on other airlines. He’s planning to remove the footrests from his chair and provide American with instructions on how to remove his batteries, which he hopes will get his chair just under the 300-pound limit. “I’m curious what sort of damage is going to result from this procedure,” he says.

He is worried about his own immediate travels, but also the broader implications should other airlines decide to implement these same types of policies. “I talk a lot about people who live in rural areas being in a desert of accessible transportation. I think that we are now facing the harsh reality that we could find there to be a desert of air transportation for power wheelchair users,” he says. “That’s a serious problem.”