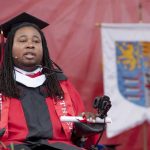 Ten years after he suffered a spinal cord injury during a football game at MetLife Stadium that left him paralyzed, Eric LeGrand continues to serve as an inspiration at Rutgers, around the state and beyond.

Perhaps the greatest testament to the difference he has made is his number 52 prominently displayed atop SHI Stadium. Retired jersey numbers are rare in college football due to roster sizes that exceed their availability. What’s even more rare, however, is the reason the number peers down upon the 52,454-seat venue. Whereas others are retired exclusively for athletic accomplishments, LeGrand’s is because of much, much more.

“A lot of kids will never see me play, but they will look up at that number 52 in the stadium and ask why it’s there. Their moms and dads will tell them exactly who I am and why. I think that is pretty cool.” – Eric LeGrand

His number 52 speaks to belief, hope, dedication, positivity and effort.

“This injury happened 10 years ago,” said LeGrand. “A lot of kids will never see me play, but they will look up at that number 52 in the stadium and ask why it’s there. Their moms and dads will tell them exactly who I am and why. I think that is pretty cool.”

There is a lot to talk about when reflecting on all LeGrand had accomplished. In the last decade, he signed an NFL contract with the Tampa Bay Buccaneers under Greg Schiano, who forged a tight bond with LeGrand and coached in the NFL before returning to the head coaching position at Rutgers. LeGrand received the Jimmy V Award for Perseverance at the ESPYs, published a book, pursued a career in broadcasting and partnered with the Christopher & Dana Reeve Foundation in the fight against spinal cord injuries.

One of LeGrand’s proudest moments was the day he graduated from Rutgers on May 18, 2014, when he received his undergraduate degree in labor and employment relations.

“Getting that degree was very, very special to me,” said LeGrand. “It wasn’t easy. I could have given up on it after my injury and no one would have blamed me, but I wanted that diploma on my wall.”

LeGrand’s many accomplishments are even more impactful considering that the response to trauma is often distance. It’s typical to avoid individuals and institutions related to an incident. He has done the opposite.

“I was always taught not to back away from the bad things that happen in life,” said LeGrand. “You take on and handle the adversity in front of you, so that it isn’t adversity anymore. I could have remained upset, hating football and life, but that’s not who I am.”

The “who he is” has enabled LeGrand to rise to the daily challenges that have become even more complicated during COVID-19. Physical therapy now takes place at his home rather than at the Kessler Institute, while the various speaking engagements he relies on for income have either been cancelled or postponed. His time with friends has also been greatly curtailed.

In response, LeGrand is quick to acknowledge that although his brand is built on positivity and relentless effort, he can also struggle, and battle negativity, just like everyone else.

“I’m still working on my patience,” said LeGrand. “Sometimes people may not realize how patient I have to be when it comes to this injury and not knowing when I will walk again. It takes a lot of patience and mental toughness to actually go through this each and every day.”

Last month on his 30th birthday, LeGrand helped to launch Forbeto (meaning “For a Better Tomorrow), an app that raises money for charities at no cost to the consumer while promoting local businesses. The platform enables consumers to earn monetary credits that can be donated to participating charities by listening to advertisements.

Meanwhile, the future of his alma mater and Rutgers football is always close to mind for LeGrand, who is excited with the appointment of President Jonathan Holloway and Schiano’s return.

“It’s exciting to have a younger, energetic African American leading one of America’s most diverse universities,” said LeGrand. ‘He took the job and then a global pandemic hit. That cannot be easy. It requires tough decisions, and I feel that he is very confident. His leadership skills are being revealed right away.”

The Scarlet Knights officially kick off their season at Michigan State on October 24, before hosting Indiana on Halloween Day. LeGrand will continue to serve as an analyst on radio broadcasts via a remote setup.

“We saw what Coach Schiano did in his first go around and how he can turn young boys into men, both on and off the field,” said LeGrand. “The student-athletes deserve that, to be pushed to their limits. It may not be easy or always fun, but they will understand that it was totally worth it.”

The bond between LeGrand and Schiano has been well documented and it continues to evolve. The player-coach relationship has become a close friendship between colleagues, with mentoring now a two-way street.

“Eric’s such a special person to me, my family and to all of us,” said Schiano. “If we all could have such a positive outlook on life and bring that attitude every day, the world would be a better place. I look to him for inspiration, just like so many other people do.”