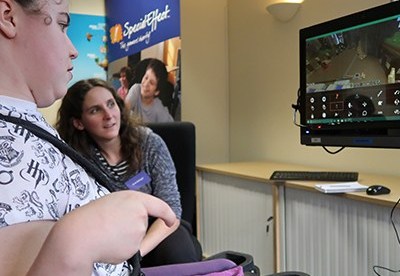 There are many young people and children who love to play Minecraft. However, some, because of their disabilities, are unable to do so, especially if they cannot move their arms or fingers to control the mouse. To make Minecraft accessible to people with disabilities, SpecialEffect, a charity organization based in the UK, has developed EyeMine – an eye tracking software especially for playing Minecraft.

EyeMine works with several eye tracking devices like Tobii and MyGaze and allows users to “click” by staring at an object (button) for a certain amount of time (called dwelling). Dwelling can allow users to control a series of buttons available on an assistive on–screen keyboard and lets them walk, fly, attack monsters, and do a lot of other things. Users can look for options that vary from basic to advanced. The more advanced the options are, the smaller the buttons get (because more options need to be fit on the on-screen keyboard).

EyeMine is free to download and works on Windows computers with at least Windows 7 on them. Watch the video below to learn more about how Becky enjoys Minecraft with just her eyes. The second video shows a demo of how EyeMine works within Minecraft.

There is a series of tutorials available too to get a user started with EyeMine.