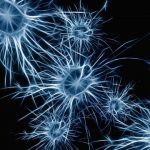 Dynamic networks that specialize in the transmission of information generally consist of multiple components, including not only primary processors, like computers, for example, but also numerous support applications and services. The human nervous system is fundamentally very similar—neurons, like computers, process and transmit information, sending molecular signals through axons to other neurons, all of which are supported by non-neuronal components, including an array of cells known as glia.

Glial cells carry out a variety of support and maintenance functions, and one type in particular—the astrocytic glial cell—has the unique ability to form scar tissue around damaged neurons. The presence of scar tissue is associated with inhibitory effects on the regrowth of mature neurons that are damaged by spinal cord injury. Recent evidence suggests, however, that these inhibitory effects are reversible, and in new work, scientists at the Lewis Katz School of Medicine at Temple University (LKSOM) and the University of Pennsylvania show that astrocytic glial cells can in fact play a major role in facilitating neuron repair.

“We found that glia have a metabolic switch associated with glucose metabolism that when triggered reverses inhibitory effects on growth and promotes axon regeneration,” explained Shuxin Li, MD, Ph.D., Professor of Anatomy and Cell Biology at Shriners Hospital’s Pediatric Research Center at LKSOM, and a senior investigator on the new study.

The research, published September 16 in the journal Cell Metabolism, is the first to establish a link between glucose metabolism in glial cells and functional regeneration of damaged neurons in the central nervous system.

In collaboration with senior investigator Yuanquan Song, Ph.D., Assistant Professor of Pathology and Laboratory Medicine at the University of Pennsylvania Perelman School of Medicine, Dr. Li and colleagues set out to investigate how scar tissue formation induced by glial cells impacts axon regeneration, using both fly and mouse models of axon injury. In initial experiments, they confirmed what previous studies had indicated, that the negative effects of glial cell activity on axon regeneration are indeed reversible. But the researchers also found that the switch between positive and negative effects on axon regrowth is directly related to the glial cells’ metabolic status.

In follow-up experiments in flies, the researchers focused specifically on glycolysis—the metabolic pathway responsible for the breakdown of glucose—and discovered that upregulating this pathway alone in glial cells was sufficient to promote axon regeneration. This same result was observed in mice. Further investigation in fly and mouse models led to the identification of two glucose metabolites, lactate and hydroxyglutarate, that act as key mediators of the glial switch from an inhibitory reaction to a stimulatory response.

Dr. Li and colleagues examined the specific pathway by which lactate and hydroxyglutarate act to enhance axon regeneration. Experiments revealed that when glial cells are activated, they release glucose metabolites, which subsequently attach to molecules known as GABAB receptors on the neuron surface and thereby activate pathways in neurons that stimulate axon growth.

“Our findings indicate that GABAB receptor activation induced by lactate can have a critical role in neuronal recovery after spinal cord injury,” Dr. Li said. “Moreover, this process is driven by a metabolic switch to aerobic glycolysis, which leads specifically to the production of lactate and other glucose metabolites.”

The researchers plan next to test the regenerative abilities of lactate and related molecules in larger animals and to determine which molecules are most effective for promoting regeneration. “The next phases of our work could set the stage for future translational studies in human patients affected by spinal cord injury,” Dr. Li added.